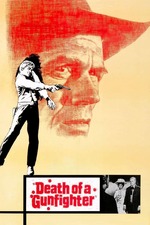 One of the better death of the old West movies. Very discursive, matter of fact directed, very unshowy yet self-aware, sort of like a late 60s atitude applied to a 50s B western. A TV director named Robert Totten started and directed most of it, star Richard Widmark fired him and his pal Don Siegel finished the movie. How much Siegel actually directed of it is open to debate, but he refuse credit saying he did less than half (if Death of a Gunfighter is known at all nowadays is for the trivia of being the first "Allan Smitee" movie). The Siegel-Widmark connection does bring to mind the previous year Madigan, another slow funeral for an out of his time cop while the crooked estabilshment watches. Madigan is much stronger overall, but Siegel certainly should feel no shame on whatever amount of work he did on this one. I like how the conflict is set between the rotten to the core town and the stubborn violent marshall, it is progress as a matter of optics with violence remaining on top regardless. The film can't stop having the usual simpathies for the losing old ways (Hollywood loves that kind of nostalgia too much), but Widmark performance is remarkable good and very able to find enough distance and the direction by both Totten and Siegel is far too no-nonsense professional to let that get in the way.