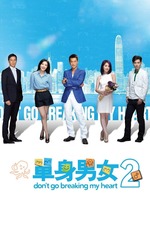 The first film love is a business transaction metaphor pushed up to an extreme: when all romantic options are ultimately so exchangeable, they are also meaningless until a heartbreaking final shot recalibrates the costs of all the weightless romantic gestures we've seen until then. This has flaws most of them dramatic (Wai hall of mirrors structure is at his self-conscious worst, Wu's absence does make things unbalanced and so on), but its mix of charm and dark vision is remarkable. This might be To’s most nihilistic film since the early Milkyway thrillers while also keeping the screwball endearing quality of the original, a mix of horror and zaniness worthy of Bringing Up Baby. Love is a matter of engineering, a series of spatial relationships that are programmed to cancel themselves out, every new image ready to erase the previous one. If the images are narrow and flatter than any other recent To film is because while Don’t Go Breaking My Heart careful presentation of Wu and Koo worthiness as romantic suitors suggested a light-hearted Daisy Kanyon, then Part 2 is Johnnie To’s late Preminger film; everything can only exist in the surface, every connection, every gesture, every decision, every piece of romantic longing set to be empty out of meaning. It is a flamboyant utter charming vision of romantic hell. No surprise it ends by showing a former alcoholic hitting the bottle.