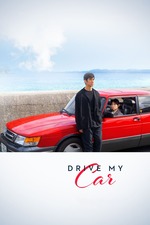 Drive My Car has two central concepts that speaks to each other and the notion of emotional truth that animates it. They also relate directly for the different jobs of its two main characters. There's the version of Uncle Vanya that the director is rehearsing, one predicted in the method of using actors that speak multiple languages under the idea that Chekov offers such a strong emotional ballast it will all come together as drama. The other is, of course, in the title, the actual driving - and it is telling the driver clearly regards her work as a craft as much as the people in the play do, she does a test for him as the actors have to and explicits that she can recognizes how he cares for his car and her desire to honor it - those two people share that space during long rides and the car becomes both a shared emotional space and a way to repositions human drama in the large world, everything is big, but at same time allowed to just flow in the road. The car is so a different less symbolic abstract form of stage for human drama.

One might say Drive My Car is about two people working through their grief and that would obvious be right, but grief here do operates in way that is very much like Uncle Vanya does for the director's work, the main word is work itself, the labor that goes into the creative process, in the way a set of emotions are articulate and expressed. The use of young actor as sort of a double, ghost and stand-in for the director help establish that idea and his big scene in the car unites it and stage.

One of the movie's major gambits is the long 40 minute prologue that is essentially a staging of what would usually be described as the director's backstory (and it is telling most of the major bits are infodumped again throughout the movie) which of course has a different effect because we got to watch it (annd contrasts for how we learn about the driver's past) and seem to play with how their a series of emotions and how they are work through the remaining movie.

While watching Drive My Car I thought a lot about one of my favorite Brazilian movies Eduardo Coutinho's Moscow, in part it is because it also concern the preparations of a Chekov play (in that case Three Sisters), but most of it is how they both work through the idea of creative labor and how it relates to emotion, they are works about performance and truth through fictional states. Moscow is "non-fiction" with the catch being that the theatre group is actually rehearsing Three Sisters for Coutinho's movie and not to stqage it and Drive My Car is of course very self-conscious literary and based on Murakami, one of the few celebrated best selling authors, and plays up its relations between the original short story and Murakami's own uses of Chekov's play in it. So I'd say both movies are very knowing in what audience brings in when it comes to expectations, be it of non-fiction or writerly fictional artifice and they are put to use to ponder on the work that goes into sustaining an idea of emotional truth and how powerful and revealing it can be.