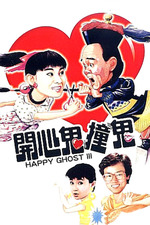 Ringo Lam-Johnny To entry in one of Cinema City’s lesser comedy series. My understand is that To direct the actors and Lam (a year from City on Fire releasing him from ill-suited comedy duties) took care of the staging. Tsui Hark, who has a cameo, supervised the fine for its period special effects. Happy Ghost stars Raymond Wong, Cinema City’s co-owner and the film's producer/screenwriter, and he remains 80’s HK least interesting screen presence ,which puts the film into an uphill battle. Luckly this entry also co-stars Maggie Cheung, who gets one of her best early roles as the ghost of a singer trying to reincarnate and after failing at first taking revenge on Wong’s character for his part on it. I always says it is a shame that as the 90’s got going Cheung played less and less light roles as she has always been a great comedienne and she is delightful here and mostly keeps the movie afloat even when material gets very questionable. The first half bogs down in too much mean spiritedness (a common Cinema City comedy flaw) as Cheung finds more and more ways to humiliate Wong, but things pick up a lot after they make a truce. Pleasant, if very unsubstantial.