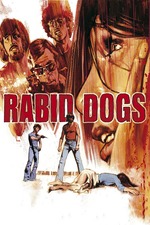 Mario Bava is one of cinema's greatest painters, his genius is one of particular abrasive form of picturalism, his characters are all dolls ready to be hacked because there's something beautiful in the sight of of dismembered bloody body. The two movies of his the operate further from this are his two more intimate and carnal works, The Whip and the Body and Rabid Dogs. That early masterpiece keeps a lot of the usual Bava surfaces but change paces by make the sexual torment behind society entropy into text and push the carnality of violence one step further, Rabid Dogs most jettison all of Bava's bavaness for lots of ugly surfaces, this time crime doesn't happens in beautiful lighted and art directed rooms, but in a moving care full of sweaty grotesque men captured through closeups that make their vile acts even more inhuman, a brutal caricature of men's worst intincts. A perfect sustained time bomb that moves through mininimum variations of tension, a great rhythmic movie for a filmmaker who usually values stillness, chamber music that comes from the guts. It is Bava's final word flipping most of his aesthetic pleasures while reaffirming his instincts.