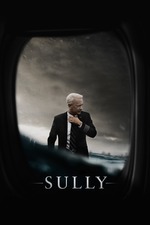 There is both lots and no drama for Eastwood to dramatize, some five or so minutes of material that has to hold together a feature. No surprise it is Eastwood shortest film (while keeping his usual leisured pace) and it still needs to contrive some to generate its running time (and the scenes in which Hanks and Eckhart have to deal with the second guessing are usually the film’s weakest). For all the usual talk about Eastwood classicism and professionalism (and in the case of Sully, the Hawksian job well done ethos that is certain an aspect of it), his films are at best when dealing at the physical and emotional toll of action, at presenting man at exhaustion. I mention that because what is so effective about Sully is that is an entire film build around the idea of first response, of just watching people physical reaction to an absurd and unnatural chain of events. The barebones simplicity of Eastwood’s work is so effective because it allows the film to just exist with this series of reactions, this is a great actor’s movie not because it offers “complicated characters” (quite the opposite, everyone here is surface and simple), but because it stays with lived-in behavior and let all those reactions and gestures carry the film. The written quality of the film comes to the decision of doubling down on those few minutes over and over again both in the actual flashbacks and the natural echo of reactions that happen in every one of Hanks’ post-accident scenes. The closest the film has to an actual emotional arc is watching how those short minutes bonded the two men in the cockpit, and it is an arc that exists almost entirely in Hanks and Eckhart’s behavior.