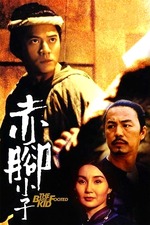 One of the fascinating things of watching movies close to their chronological order is that it sometimes allow for greater context. The Bare-Footed Kid was released 2 months after The Heroic Trio, but they are a study in contrasts. While the former was taken by a strong influence from Film Workshop wuxias of the period with heavy stlyzed imagery and nearly abandoning narrative for pure sensation, The Bare-Footed Kid is a remake of a 1975 Chang Cheh film that uphelds Shaw traditions and, made the same year Cheh directed his last film, is very clearly intended as a tribute. It suffers some by young Aaron Kwok supressing his natural brashness for bland likability, but co-stars Ti Lung and Maggie Cheung picks some of the dramatic weight. At this point, To probably can't complete pull the Cheh impression, the third act shift from comedy to violence and cruelty is impressive, but not fully earned. The action scenes are impressive, and again again have very little to do with the agressive wire fu Ching Siu Tung used in The Heroic Trio.