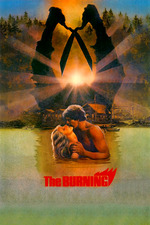 The Burning remains the best of the Tom Savini starring vehicles and one of the superior non-auteur slashers. Some of this is just that it is pretty good when it comes to do what it is advertising those are ome mean stabings from Savini's collection oftrickers to butcher people. But a lot has to do with the decision of treating the summer camp setting seriously. Friday the 13th and most of its clones act like the down time between the murder is just filler, but The Burning treats the Meatballs action as if it matters, it makes hanging with those teens meaningful enough that when the killer spree starts for real in the back half, it is more than just functional. By the same account, the finding the massacre raft scene is not something the genre usually does, often when we get a finding the bodies scene it is there for pure plot reasons, the one here is far more focused on how fuck up those kids going to be for years after that. Maylan's direction is one of the best in the genre, not only his first rate control of space, but his careful eye, it is one of the rare slashers as attentive to the greens from the woods as the reds of blood.