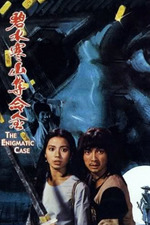 Johnnie To’s first feature remains a curious false start to his career combining Wu Xia elements with fatalistic writing and a dour dry revisionist take. It is very much part of Hong Kong New Wave Wu Xias like Tsui’s The Butterfly Murders and Tam’s The Sword, but don’t quite have the kinetic kick that animate those films. Because of that it often resembles one of those revisionist films who gambles on lefting out traditional genre pays offs as a way of distance themselves from its models. It is interesting to think about it in a New Wave context as despite being of relative similar age for most filmmakers of the period, To’s late bloomer status usually keep him away from those discussions. It is also worth to compare it to Chor Yuen’s The Convict Killer, a similar but much superior nourish martial arts film from 1980, that does some similar dramatic moves without worrying to set itself apart from tradition. To do manage to stage a strong ending that is by far the film’s more memorable set piece. The Enigmatic Case was shot for a small studio with leftist connections, so To go to China, which made it one of the few period HK films of the time to benefit from actual Chinese location and it puts it good use adding to its overall desire for authenticity. Andrew Kam is listed as co-director, it is hard to know his contributions as this is not a typical To and Kam himself is better known as an assistant director for John Woo and Tsui Hark through the 80s and has very few solo credits (he is also the credited co-director on The Big Heat which suggests stronger To connection).