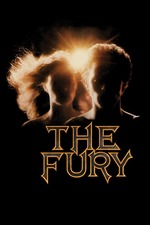 The Fury remains the best of De Palma's "for hire" assigments because it is the most perfect deployment of his bombast in a large Hollywood canvas. And I don't mean just the infamous Cassavetes blows up ending (but let's face it, The Fury would be one of the greatest American movies on that scene alone) , but everything from the opening scene with its perfect aggressive framing onwards save for a few of the quieter moments with Irving at the school operates on the same manner. The Fury is often dismissed for coming after Carrie and while it is true there's nothing here like Spacek's very wounded performance to ground it, it uses the telekinesis motif for a far diferente purpose. This is pure post-human cinema, existing only as image and telekinesis both represent image as a form of pure trauma one carries and its grotesque release. It is the modern horror movie in its stripped down essential.

PS: And don't forget, Cassavetes paid the debts of Opening Night with his paycheck, so we got two pantheon movies for the price of one.

The Doll of Satan