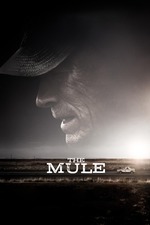 Riding along with a ghost. The big road, the open space of possibility and time and the texture of fiction, of past regrets and present privileges. Careful modulated. As often with Eastwood deeply felt, but not devoid of awkward moments that are there for plot concerns (most of the stuff about Cartel politics and some of the DEA). Every time it is just Clint there in the road or dealing with the remains of his family life this just soars. It is certainly intended as a dyptich of reckonings wih Gran Torino, but that was Eastwood's final word about his screen image and this one much more about the limits of his own individualistic ideology through the philosophic conudrum that one can't drive past time. Like that previous triumph, this is a contemporary western (that gruff one word meeting of equals between Eastwood's mule and Cooper DEA agent should seal the deal) that is predicted in notion of American decay that is both sharply critical and conservative. One should point out that The Mule feels livelier than Eastwood's work from the past decade, some I suspect because of how fast it was assembled which highlights the sense of discovery that has long been a Eastwood quality, but also because of the change on colaborators: Yves Bélanger doing cinematography (less drenched on shadows than any Eastwwod film of the past two decades), jazz great Arturo Sandoval score which avoids some of the standard Eastwoodisms and a set design/art direction crew that is mostly new as well, for a guy who always valued continuity and has a very estabilished crew at Malpaso that is a lot of new perspectives and I think it adds to how refreshing The Mule feels.