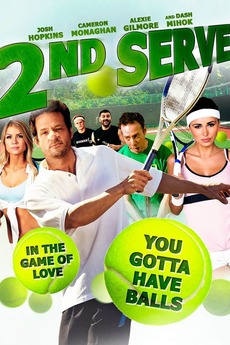 In the game of love you gotta have balls.

(Long Synopsis) "When former tennis pro Owen “Game Set” Match gets fired from his cushy job instructing at the affluent Fountain Club, he’s forced to take a position at the gritty public courts of the Derby City Recreation Center. There he contends with his new co-workers, a ragtag group of tennis pro misfits; his boss Sherry, a strong-willed, single mother; and her son Jake, a goth teenager and secret tennis hopeful. Slowly Owen begins to win over his colleagues, mend his broken friendships and help Jake fix his serve … and develops a romantic connection with Sherry, despite her insistence that she doesn't date tennis pros. Just when things seem to be looking up, Owen’s former boss and court nemesis challenges the Derby City club to a showdown in the annual Combo Cup tennis tournament. As he leads his team of oddball amateurs, Owen learns the most valuable lesson of all … On the court or off, everyone deserves a second chance!"