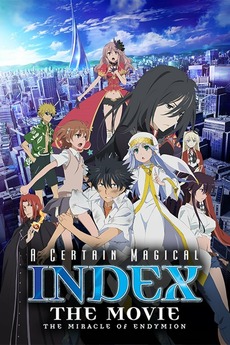 A Certain Magical Index: The Miracle of Endymion
JustWatch

A Certain Magical Index: The Miracle of Endymion

On the day Tōma Kamijō and Index see Academy City's space elevator, Endymion in the distance, they meet a Level 0 girl with an amazing singing voice, Arisa Meigo. As the three enjoy their time together after school, magic-user Stiyl Magnus suddenly attacks them. His target: Arisa. Why would a girl from the science side be targeted by someone from the magic side, Tōma wonders. In the chaos of Stiyl's attack, he tells Tōma, Index and Arisa that she might cause a war between the magic side and the science side.

Yes, there's a lot of weird arbitrary inclusions on this list, but I want it to be as exhaustive as…