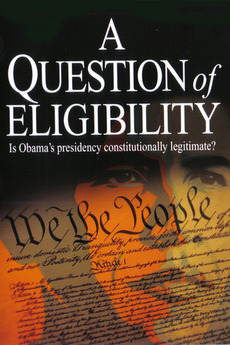 A Question of Eligibility
JustWatch

A Question of Eligibility

WHAT if the president of the United States is not constitutionally eligible to serve? Is it possible that a straightforward criterion was overlooked during a long, grueling, expensive campaign? Why are so many questions about something so simple still going unanswered? "A Question Of Eligibility" goes where no other documentary has dared to go in seeking the answers to those questions, including one that millions of Americans are asking: "Why won't Barack Obama release publicly the long-form birth certificate he claims to have from the state of Hawaii?"