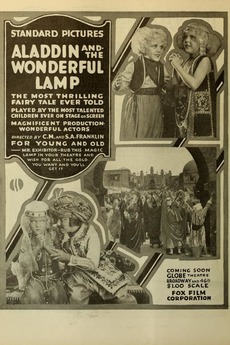 Aladdin and the Wonderful Lamp
JustWatch

Aladdin and the Wonderful Lamp

In Bagdad, Princess Badr al-Budur, the daughter of the Sultan, falls in love with Aladdin, the son of a poor tailor, and rejects the suit of evil alchemist al-Talib, her father's choice. Al-Talib consults his Evil Spirit, who advises him to find the magic lamp hidden in an underground cave. Unable to get it himself, al-Talib hires Aladdin, who secures the lamp but keeps it when he realizes al-Talib's wickedness. With wealth obtained through wishes, Aladdin courts the princess. After the lamp changes hands between al-Talib and Aladdin, al-Talib steals it and abducts the princess to the desert. Aladdin follows with only a gourd of water. Suffering from thirst and exhaustion, Aladdin nearly succumbs, but the horsemen of the Sultan, who learned of his daughter's abduction, ride up and rescue Aladdin.

I will not include (with a few exceptions): erotic/hardcore adaptations; countless Barbie versions; awful low-budget horror versions.