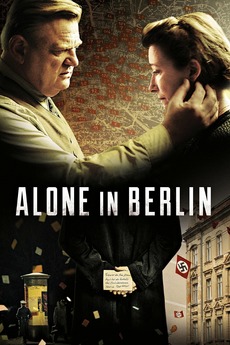 Berlin in June of 1940. While Nazi propaganda celebrates the regime’s victory over France, a kitchen-cum-living room in Prenzlauer Berg is filled with grief. Anna and Otto Quangel’s son has been killed at the front. This working class couple had long believed in the ‘Führer’ and followed him willingly, but now they realise that his promises are nothing but lies and deceit. They begin writing postcards as a form of resistance and in a bid to raise awareness: Stop the war machine! Kill Hitler! Putting their lives at risk, they distribute these cards in the entrances of tenement buildings and in stairwells. But the SS and the Gestapo are soon onto them, and even their neighbours pose a threat.

The "450" films available to UK Cinemas for lockdown transition.

In honor of the Berlinale 2018 I thought to put a List together, which has every Movie, that takes place…

Movies that are not…

A selection of films worthy of note that have less than 5.5k 'watched bys' on Letterboxd (as of August 8th…

Every 2017 film (that I have seen) ranked on their quality as a film, overall thematic strength, and my personal…