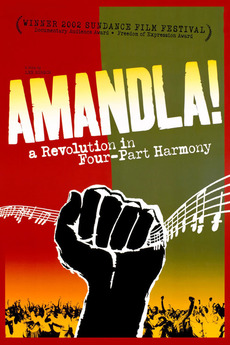 Amandla! A Revolution in Four-Part Harmony

The struggle to eradicate apartheid in South Africa has been chronicled over time, but no one has addressed the vital role music plays in this challenge. This documentary by Lee Hirsch recounts a fascinating and little-known part of South Africa's political history through archival footage, interviews and, of course, several mesmerizing musical performances.