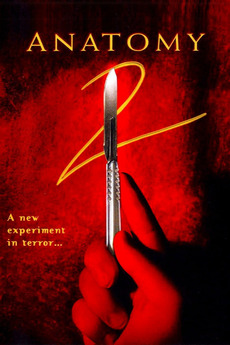 A new experiment in terror...

The doctor and soccer player in the leisure time Jo Hauser decides to move to Berlin and be an intern in a famous clinic, expecting to increase his knowledge and expertize, and help his handicap brother Willi Hauser. He joins a secret fraternity of doctors, under the leadership of Prof. Muller-LaRousse, who is researching the use of bionic muscles in human beings without any ethics or respect to the laws. The team is also volunteer to the experiences, and is under investigation of Paula Henning. When Jo gets close to a Filipino nurse, and becomes addicted in the drugs used in experience, he realizes the truth hidden in the methods used by the secret society in the development of science.

Horror films which feature a hospital. I will also include Doctor's offices, as long as they are not therapists.

All the horror movies I own on physical media. It's always expanding so feel free to leave suggestions for me…

In honor of the Berlinale 2018 I thought to put a List together, which has every Movie, that takes place…

It began in the '10s and '20s of the 20th century. German expressionism was the leading genre of horror cinema…

A collection of horror and mystery including some cross-overs and international co-productions from German-speaking regions in chronological order.