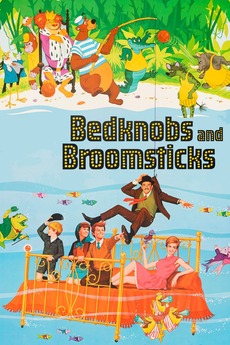 You'll beWITCHED! You'll beDAZZLED! You'll be swept into a world of enchantment BEYOND ANYTHING BEFORE!

Three children evacuated from London during World War II are forced to stay with an eccentric spinster (Eglantine Price). The children's initial fears disappear when they find out she is in fact a trainee witch.