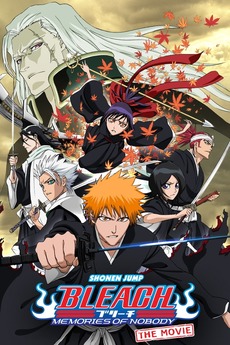 Bleach the Movie: Memories of Nobody
JustWatch

Bleach the Movie: Memories of Nobody

2006 ‘劇場版 BLEACH MEMORIES OF NOBODY’ Directed by Noriyuki Abe

In Karakura Town, unidentifiable spirits begin appearing en mases. While attempting to deal with these strange souls, Ichigo Kurosaki and Rukia Kuchiki meet Senna, a mysterious shinigami who wipes out most of them. Senna refuses to answer any questions, so Ichigo is forced to follow her while Rukia tries to find out what's going on.

Bleach - Movie 1 - Memories of Nobody

Anime I watched sometimes. Updating slowly my anilist.co to Letterboxd

The Most Watched Animated Movies