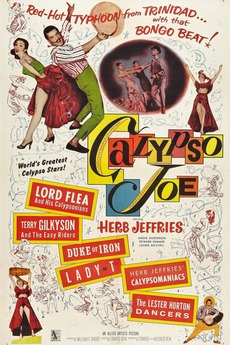 Get Hep, Get With It, Get A Look At "Calypso Joe"

Juile, an airline hostess, has her mind made up to marry South American millionaire Rico Vargas, in spite of the efforts made by her former boyfriend, Lee Darling, a television star, to win her back. Rico's sister, Astra, makes a play for Lee, who only responds to make Julie jealous. As the plane bearing Juile and others (includng all the credited musicians and bands) is about to depart, Herb Jefferies smuggles Lee on board so he can have a chance to dissuade Julie.