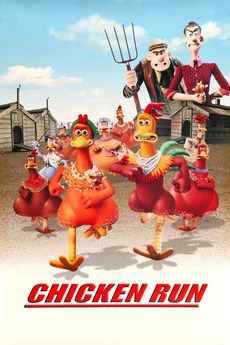 This ain't no chick flick. It's poultry in motion.

Having been hopelessly repressed and facing eventual certain death at the British chicken farm where they are held, Ginger the chicken along with the help of Rocky the American rooster decide to rebel and lead their fellow chickens in a great escape from the murderous farmers Mr. and Mrs. Tweedy and their farm of doom.