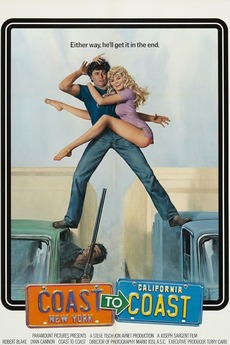 Either way, love will win in the end.

Madie is a neurotic, wealthy woman who escapes from a New York state mental hospital where her unwholesome husband had her committed to avoid the trial of a expensive divorce. Madie hitches a ride back to California with a certain Charles Callahan, a debt-ridden truck driver. Madie and Charles eventually fall in love while evading an assortment of bad guys including a pair of thugs hired by Madie's husband to prevent her from returning to California, and a repo man sent to reclaim Charles' truck

If you know what it is, enjoy, but shhhh.