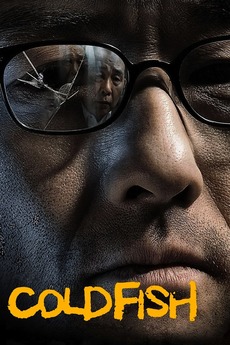 He'll make you pick up the pieces

Shamoto runs a small tropical fish shop. When his daughter Mitsuko is caught shoplifting at a grocery store a man named Murata steps in to settle things between the girl and the store manager. Murata also runs a tropical fish shop and he and Shamoto soon become friendly. However Murata hides many dark secrets behind his friendly face.