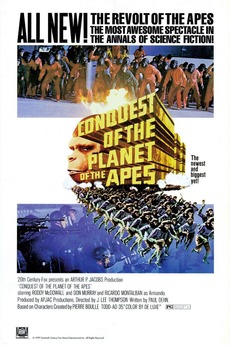 Conquest of the Planet of the Apes
JustWatch

Conquest of the Planet of the Apes

All new! The revolt of the apes. The most awesome spectacle in the annals of science fiction!

In a futuristic world that has embraced ape slavery, Caesar, the son of the late simians Cornelius and Zira, surfaces after almost twenty years of hiding out from the authorities, and prepares for a slave revolt against humanity.