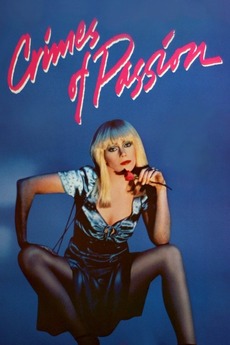 Never have two consenting adults consented to so much.

Joanna Crane lives a double life. During the day she works as fashion designer but during the night she is the high class prostitute China Blue. As she is accused for industrial spying, Bobby Grady is hired to shadow her. However, they fall in love. Meanwhile a psychopathic preacher starts stalking her.