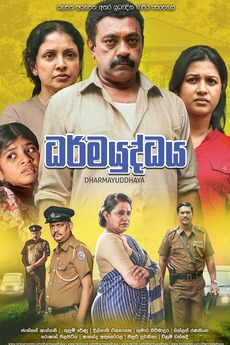 The ultimate battle between truth & justice

(Sinhalese: ධර්මයුද්ධය) is a 2017 Sri Lankan Sinhala Family drama film directed by Indian director Cheyyar Ravi and produced by MTV Channel for Sirasa Films of The Capital Maharaja Organization Limited and is distributed by M Entertainments.It is a Sinhala remake of the Indian Malayalam- language film Drishyam originally written by Jeethu Joseph. Dharmayuddhaya follows the story of Harishchandra; a self-made businessman, loved and respected by all in the area. His wife and two children are his most valued treasures of his life and he spends lot of time watching films which is his hobby. Due to a stranger who enters their lives, his life along with the lives of his wife and daughters’ change unexpectedly