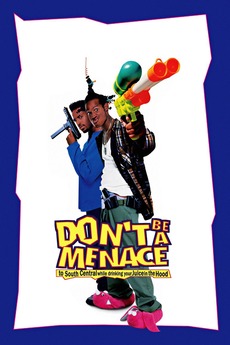 Don't Be a Menace to South Central While…
JustWatch

Finally, the movie that proves that Justice isn't always Poetic, Jungle Fever isn't always pretty, and Higher Learning can be a waste of time.

When Ashtray (Shawn Wayans) moves to South Central L.A. to live with his father (who appears to be the same age he is) and grandmother (who likes to talk tough and smoke reefer), he falls in with his gang-banging cousin Loc Dog (Marlon Wayans), who along with the requisite pistols and Uzi carries a thermo-nuclear warhead for self-defense. Will Ashtray be able to keep living the straight life?

In response to the Criterion Collection...

lighthearted movies with black characters in them because we deserve movies that aren't about slavery, racism, police brutality, and the like