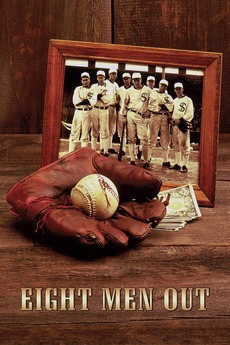 When the cheering stopped, there were... Eight Men Out.

The great Chicago White Sox team of 1919 is the saddest team to ever win a pennent. The team is bitter at their penny pincher owner, Charles Comiskey, and at their own teammates. Gamblers take advantage of this opportunity to offer some players $ to throw the series (Most of the players didn't get as much as promised.) But Buck Weaver and the great Shoeless Joe Jackson turn back at the last minute to try and play their best. The Sox actually almost come back from a 3-1 deficit. 2 years later, the truth breaks out and the Sox are sued on multiple accounts. They are found innocent by the jury but baseball commissioner Landis has other plans. The eight players are suspended for life, and Buck Weaver, for the rest of his life, tries to clear his name.

Books I Read in Jail, Presented in Movie Titles and Posters (January 2013-November 2014)

I dunno. This is goofy. Open the notes to see the titles, which at times make no sense.