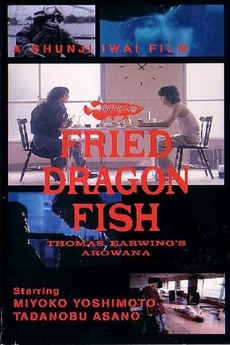 A salesman from Delta Works, a London-based computerized database, offers a one month free trial that seems uninteresting until he mentions that an operator, always selected from a group of young women in their 20's nick-named "Delta Ladies", will also be supplied in the trial period. Poo arrives at the one-man Aida Detective Agency with the Delta Mazelan 'F' Series hardware. A dragon fish has been stolen by Tetsu Tobiyama and biologist Thomas Earwing seeks its return (the Super-Red variety is worth 10 million yen). The system fails to provide info about Tetsu, but Poo worms her way into a top secret file at Delta headquarters, finding that he supplies trained assassins for use worldwide. Searching tropical fish outlets where Tobiyama shops for supplies, Poo is led to Natsuro, living alone with fish tanks, one of which contains a dragon fish. This enigmatic young man is not only mysteriously attractive to Poo, he also seems to attract the attention of hit men aimed at him.

not on letterboxd that im still looking for: