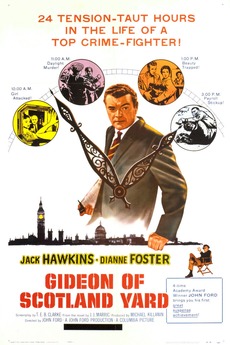 24 Tension-Taut Hours in the Life of a Top Crime Fighter!

Scotland Yard Inspector George Gideon starts his day off on the wrong foot when he gets a traffic-violation ticket from a young police officer. From there, his 'typical day" consists in learning that one of his most-trusted detectives has accepted bribes; hunts an escaped maniac who has murdered a girl; tracks a young girl suspected of a payroll robbery and, then, helps break up a bank robbery. His long day ends when he arrives at home and finds that his daughter has a date with the policeman who gave him a ticket that morning.

Personal ranking of the films that I believe to be the greatest.

Tried to stay as objective as possible, in…

What Nixon Saw and When He Saw It