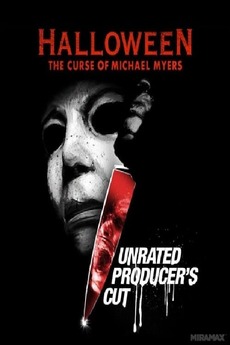 Six years after Michael Myers' last massacre in Haddonfield, Jamie Lloyd has a child, but is then killed by Michael. Michael is allied with the Cult of Thorn, who both protect him and gave him the Curse of Thorn, the reason he killed all of his family. The Strode Family also moved into the Myers' house and are stalked by Michael. Sam Loomis and Tommy Doyle, a boy Laurie babysat during Michael's first rampage, are now out to stop Michael and the cult. Michael heads to kill Jamie's son and the rest of Laurie's family, but Dr. Loomis and Tommy plan to stop the curse, defeat the cult, stop Michael, and put an end to his murderous rampages, once and for all.

Complete list of every film myself and my partner own on Blu Ray, DVD and 4K UHD. I’ll update it…