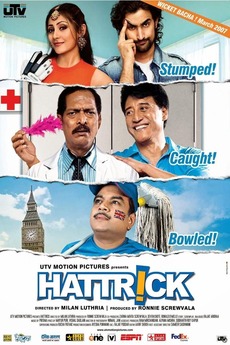 Despite cricket fever running wild, there are two people in India who dislike its influence over their lives. The first is Dr. Satyajit Chavan, who will not permit anyone in his home nor the hospital to view nor hear anything related to it; and the second is Kashmira, who is recently married to Sarabjeet Singh, and hates cricket as her husband is obsessed with it and has even neglected to be attentive leave alone take her for a honeymoon. Then there is Hemandra Patel, located in England for over 10 years, works as an airport Janitor, but has told everyone he is a Customs Officer, is awaiting word on his becoming a Citizen, but his fate rests with Immigration Officer, Cook, who hates all Patels, including Sardar Vallabhai Patel. Watch how the world cup influences them, and the shock that awaits Hemandra when he finds that his daughter is secretly seeing an English-African male by the name of Silver.

Taking recommendations to keep this updated