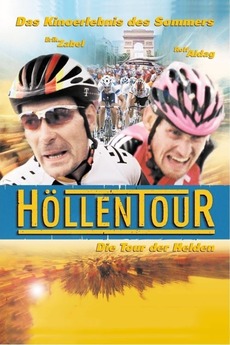 Year after year hundreds of thousands of fans line the route of the Tour de France, cheering on their heroes and willing them to victory, while millions of viewers worldwide tune in on their televisions. Academy Award-winning director Pepe Danquart, fascinated by the spectacle of the three week race, chose to focus on the courage, the pain and the fear of the riders of the Tour. Training his lens on German superstar sprinter Eric Zabel and his loyal domestique Rolf Aldag, Danquart captures the thrill of the race and the teamwork behind the stars of the peleton. He also shines light on the Tour's supporting cast - the director sportifs, masseurs, and, of course, the wildly enthusiastic fans. Reveling in the stunning landscape - from the Alps to the Pyrenees to the Massif Central to Paris - and with a nice dollop of Le Tour's history, HELL ON WHEELS transcends the sport it celebrates to reveal an astonishing human endeavor.

I've got a bike. you can ride it if you like.

I have to try and keep track of the TV series I watch somehow! These are just the series I…