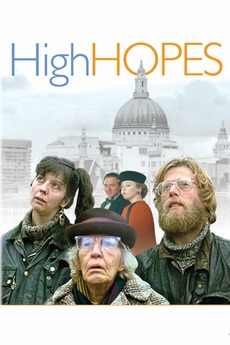 Slice-of-life look at a sweet working-class couple in London, Shirley and Cyril, his mother, who's aging quickly and becoming forgetful, mum's ghastly upper-middle-class neighbors, and Cyril's pretentious sister and philandering husband. Shirley wants a baby, but Cyril, who reads Marx and wants the world to be perfect, is reluctant. Cyril's mum locks herself out and must ask her snooty neighbors for help. Then Cyril's sister Valerie stages a surprise party for mum's 70th birthday, a disaster from start to finish. Shirley holds things together, and she and Cyril may put aside her Dutch cap after all.