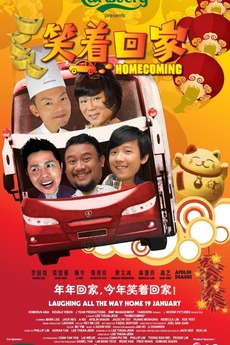 "Homecoming" is about three stories of three different individuals going home for Chinese New Year. A major highlight of the movie is that Jack Neo, who will be cross-dressing on the big screen again after eleven years since "Liang Po Po The Movie" back in 1999. He will be playing mother to Ah Niu's character. It is said that he was told to lose at least 5kg for his role. Jack Neo long time collaborator Mark Lee and Malaysian multi-talented writer-director-comedian Afdlin Shauki are among the cast.