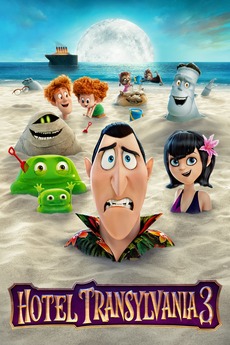 Family vacation. It will suck the life out of you.

Dracula, Mavis, Johnny and the rest of the Drac Pack take a vacation on a luxury Monster Cruise Ship, where Dracula falls in love with the ship’s captain, Ericka, who’s secretly a descendant of Abraham Van Helsing, the notorious monster slayer.