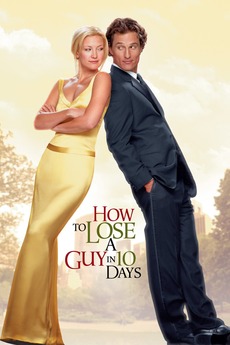 How to Lose a Guy in 10 Days
JustWatch

One of them is lying. So is the other.

An advice columnist, Andie Anderson, tries pushing the boundaries of what she can write about in her new piece about how to get a man to leave you in 10 days. Her editor, Lana, loves it, and Andie goes off to find a man she can use for the experiment. Enter executive Ben Berry, who is so confident in his romantic prowess that he thinks he can make any woman fall in love with him in 10 days. When Andie and Ben meet, their plans backfire.

(UPDATED: August 2, 2020) Here's a complete listing of films streaming on HBO Max. I'll do my best to keep…

rewatches; man on the moon, jaws