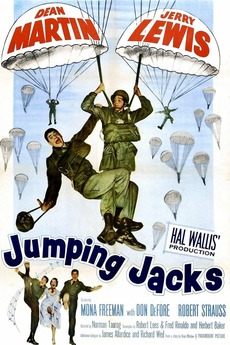 IT'S A RIP-ROARING RIOT! When Dean and Jerry Reach For Their Rip-Cords...

Hap Smith, nightclub entertainer, has a new act since his former partner Chick Allen joined the army: with lovely new partner Betsy Carter, Hap plays a clownish parody of a soldier. Meanwhile, Chick is organizing a soldier show at Fort Benning and finds he needs his old partner's help. To get onto the base, Hap impersonates a hapless real soldier, Dogface Dolan; but circumstances force them to prolong the masquerade, creating an increasingly tangled Army-sized snafu.