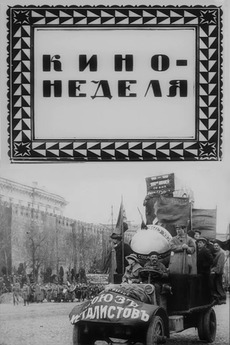 The Kino-nedelya newsreels constitute the first films of Dziga Vertov. A total of 43 issues, each containing an average of 5 to 7 different items, were produced between May 1918 and June 1919. In the fall of 1918, Vertov joined the newsreel’s ranks and soon took on full responsibility for the series, defining the content and structure of each issue. The films provide an invaluable record of life in the young Soviet Russia, then in the throes of civil war.

Most popular, acclaimed, and interesting short films that are 15 minutes long.

This is a copy of the iCheckMovies list by @bdcortright. It's more complete than the one already on Letterboxd.

A very special series of films screened on a repertory basis, the Essential Cinema Repertory collection consists of programs of…

Famous playwright and essayist Anatoly Lunacharsky(1875-1933) once said: "Leniniana[all the art, dedicated to Lenin] has captured a world-wide figure, in…

This list contains all movie sthat are on official lists at iCheckMovies. The source for this list are the "Tim2460"…