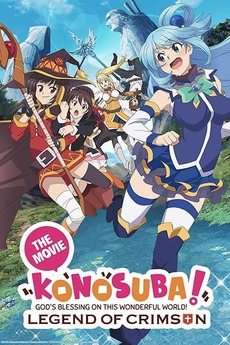 KonoSuba: God's Blessing on this Wonderful World! Legend of Crimson

We will definitely return alive. Go back to that place.

It is not strange that the Demon Lord's forces fear the Crimson Demons, the clan from which Megumin and Yunyun originate. Even if the Demon Lord's generals attack their village, the Crimson Demons can just easily brush them off with their supreme mastery of advanced and overpowered magic. When Yunyun receives a seemingly serious letter regarding a potential disaster coming to her hometown, she immediately informs Kazuma Satou and the rest of his party. After a series of wacky misunderstandings, it turns out to be a mere prank by her fellow demon who wants to be an author. Even so, Megumin becomes worried about her family and sets out toward the Crimson Demons' village with the gang. There, Kazuma and the others decide to sightsee the wonders of Megumin's birthplace. However, they soon come to realize that the nonsense threat they received might have been more than just a joke.

not as good watching as last year, but that's to be expected. there were still a great deal of gems,…

In this list are all Animes on Letterboxd ranked by their ratings. I only rank the films and not the…

Well, time to begin my burning of 2020 too. This is going to be mostly me going through rapid-fire reviews…

Back again for another Ranked List where I will update as the year goes on. Only feature-length films or films…

A selection of popular and unfamiliar animated feature films in chronological order. Please make a suggestion if you think an…