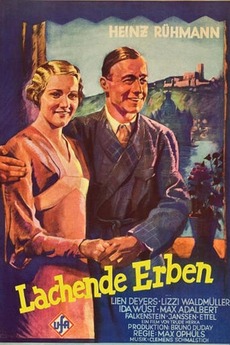 After the death of his uncle, the owner of Bockelmann Champagne, Peter turns up for the reading of the will. Justus Bockelmann, a producer of mineral water, is confident he will inherit the business, but ‘for reasons of moral rectitude’ he has no intention of running an ‘alcoholic business’. The opening of the will comes as a surprise to all the potential heirs.

1933, the year of cinematic MUSICALS!!! Busby Berkeley arrives on the scene and Warner Bros does 3 classics on…

This list contens every german movie, which is discribed by wikipedia as significant.

The camera exists to create a new art and to show above all what cannot be seen elsewhere: neither in…

A complete homage to be held in San Sebastian and Valencia, that will show all his remaining films. A must!