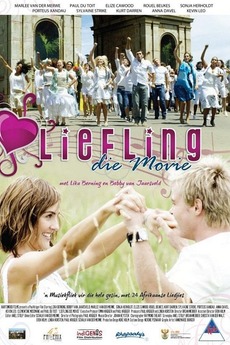 Liefling the movie is one big nostalgic train and carriage that collides head- on with your "Boer" heart!

The name of the film, Liefling, says it all. This is a love story that's been told by using evergreen Afrikaans songs from the 70's up to the latest hits of today. This musical is mainly about the life of Liefling Marais, a girl with a passion for life, who loves adventure. Liefling lives on a farm with her father Simon, mother Linda, grandfather Karel, brother Kobus and house keeper Katy. Simon is a professor at the university where we meet the 3 friends, Jan, Pieter and Gert in one of his classes. They also live in Hartbeespoort Jan lives with his grandmother Elsa Ferreira. The story starts during the December holidays. A spoilt rich girl, Melanie von Staden has one thing in mind and that is to reel in heart throb Jan Ferreira who has his eye set on Liefling. Fate unexpectedly brings lovers, friends and so called enemies together. This is a love story full of tears and laughter, song and dance.

The original list seems to have gone, so here's a replacement list which I'm sure many will find helpful.