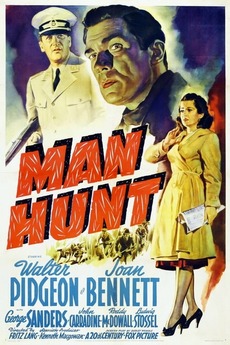 British hunter Thorndike vacationing in Bavaria has Hitler in his gun sight. He is captured, beaten, left for dead, and escapes back to London where he is hounded by German agents and aided by a young woman.

I just can't get enough of poorly contrived murder game scenarios. Deadly puzzles? Fatal competition? For some reason, I'm there.…