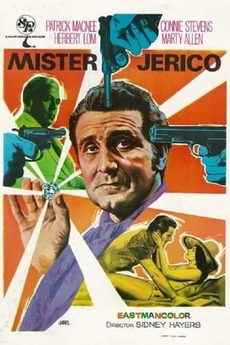 Made for TV, Mister Jerico stars Patrick Macnee as smooth con artist Dudley Jerico. Marty Allen, the brillo-haired member of the Allen and Rossi comedy team, is good for a few laughs as Jerico's sidekick. The pair are in Malta to pull off a spectacular scam. Millionaire Herbert Lom is covetous of the mate for his priceless "Gemini diamond," and Jerico drops subtle hints suggesting he's the man to supply the elusive gem. The publicity packet for Mister Jerico assured that we'd see "a comic run of fake and real gems, mixed identities, and pell-mell chases." What we never saw was the weekly series for which Mister Jerico was so obviously the pilot film.