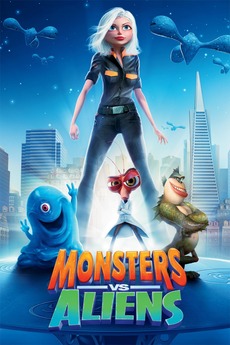 When aliens attack, monsters fight back.

When Susan Murphy is unwittingly clobbered by a meteor full of outer space gunk on her wedding day, she mysteriously grows to 49-feet-11-inches. The military jumps into action and captures Susan, secreting her away to a covert government compound. She is renamed Ginormica and placed in confinement with a ragtag group of Monsters...