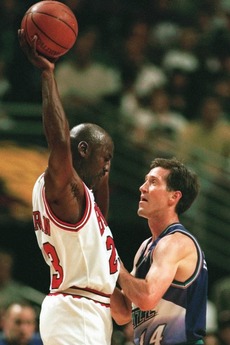 The 1997 NBA Finals was the concluding series of the 1997 NBA playoffs that determined the champion of the 1996–97 NBA season. The Western Conference champion Utah Jazz took on the Eastern Conference champion Chicago Bulls for the title, with the Bulls holding home court advantage. The series were played under a best-of-seven format, with the first 2 games in Chicago, the next 3 games in Salt Lake City, and the last 2 games in Chicago.The Bulls won the series 4 games to 2. For the fifth time in as many Finals appearances, Michael Jordan was named NBA Finals MVP.

Summer watchlist ideas... movies available at this time with my streaming services