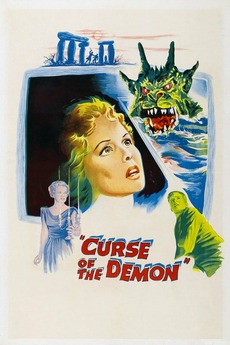 Night of the Demon

Who will be the next in line to defy the curse?

American professor John Holden arrives in London for a conference on parapsychology only to discover that the colleague he was supposed to meet was killed in a freak accident the day before. It turns out that the deceased had been investigating a cult lead by Dr. Julian Karswell. Though a skeptic, Holden is suspicious of the devil-worshiping Karswell. Following a trail of mysterious manuscripts, Holden enters a world that makes him question his faith in science.

Curse of the Demon