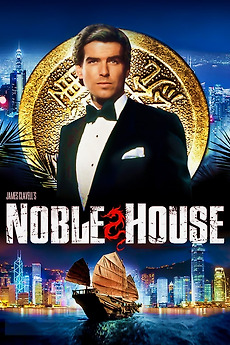 Noble House is an American television miniseries that was produced and broadcast by NBC in 1988. Based upon the novel Noble House by James Clavell, it features a large cast headlined by Pierce Brosnan as business tycoon Ian Dunross and was directed by Gary Nelson. However, due to time restrictions, several of the many subplots from the book were removed.

This is NBC's second miniseries adaptation of a Clavell novel, the first being 1980's Shōgun. Both take place in the same fictional universe with Noble House featuring connections to Shōgun and another Clavell work, Tai-Pan.

For the miniseries, the timeframe of the novel was changed; Clavell's original novel takes place in the early 1960s, but the miniseries was updated to the 1980s. The building prominently displayed and used as Struan's is Jardine House.

Needs to be added to TMDB: Born Too Soon (1993) EDNY Ellery Queen: Don't Look Behind You Flesh and Blood…

Inspired by another Letterboxd user (whose list I was incapable of finding), I want to see a miniseries each month…

Beyond Bond: The Other Works of 007 Actors

Building off of this list regarding the filmmakers of Bond, I thought it would be interesting to compile of a…

The Most Comprehensive List of Films Sold, Distributed and Released Through Umbrella Entertainment Australia

Active from 1983 to 1989, the DEG produced and/or distributed the following films during its existence.

Movies about the British Empire

Looking for movies set during or especially about the British Empire. Don't know if we should include movies set in…