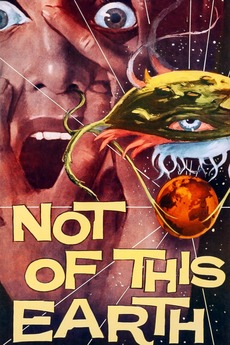 Not of This Earth
JustWatch

Not of This Earth

Somewhere in this world stalks a thing that is...

An agent from a distant planet has been sent to earth to ship large quantities of blood to his world, where a plague is ravaging the populace. He comes equipped with an interstellar matter transmitter, telepathic mind-control powers, and deathray-shooting eyes. Because he is also affected by the blood disease, he gains control of the town's physician and has him place a nurse at his disposal, while he collects live humans for fresh blood; but gains the nurse's suspicions, along with those of her boyfriend - a town police officer.